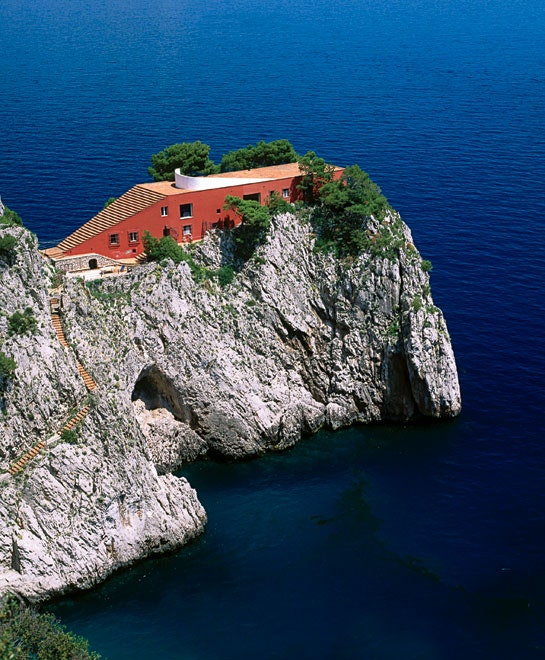 One of the most captivating and unusual structures in the world, Casa Malaparte on the island of Capri is an ode to solitude.

Could there be a more ravishing work of architecture than Casa Malaparte? “A beautiful thing, forged out of a brutal environment,” is how architect Simon Jacobsen describes this minimalist plinth of a house, built in 1942 atop a craggy promontory on the island of Capri. “It makes you think of Greta Garbo’s famous line, ‘I want to be alone.’ ” Its owner did, by all accounts. Curzio Malaparte was a brash man of letters who fell afoul of Mussolini in 1933 and was exiled to a speck of land in the Mediterranean. Banishment had a paradoxical effect: Upon his release, Malaparte longed for more remoteness and seclusion. After buying a site on Capri’s eastern coastline, he had the noted architect Adalberto Libera draw up plans for a home, but later threw them out in favor of his own vision—a stolid, jutting form, with a lyrical windbreak on top and a tapering exterior staircase. “A house like me,” Malaparte often said. Today the dwelling is owned by the writer’s heirs and most easily seen by boat (or by revisiting Jean-Luc Godard’s 1963 film Contempt, in which the roof provides a sunbathing venue for Brigitte Bardot). Interior designer Steven Volpe got a rare private invitation years ago and remembers walking the tortuous footpath, touring the hauntingly spartan rooms—and, most vividly, climbing to the rooftop. “Up there it was dream-like,” he recalls. “You feel like you’re in heaven.”