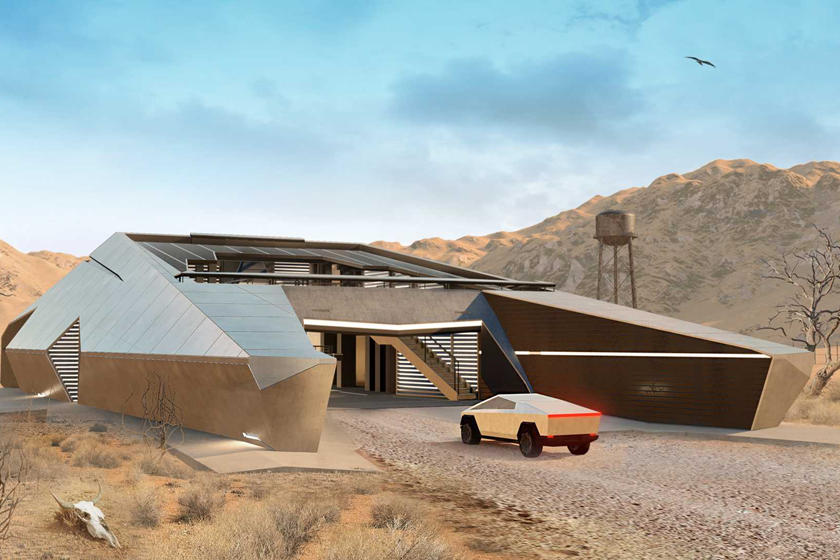 This Is The Tesla Cybertruck Home Of Your Dreams

The Cyberhouse is the No. 1 bunker of choice among Blade Runner-loving cyberpunk survivalists. Probably.

We know what you're thinking: "I simply love the strange, highly planar, angular design of the Tesla Cybertruck, but I couldn't possibly justify parking it in front of my plebeian mid-century ranch house. If only I lived in a real-life piece of Halo concept art so I could justify buying Elon Musk's rolling sci-fi masterpiece."

Fear not, because some architects from Russia have heard your thoughts and designed a bunker house exactly right for you, the diehard Tesla Cybertruck fan. Dubbed "Cyberhouse", the multi-level metal-and-concrete bunker is the work of the architects at Modern House, who penned the design concept purely as an exercise but have reportedly already received a couple of proposals.

The Cyberhouse measures 300 square meters - roughly 3,200 square feet - inside, making it suitable for 6 to 7 people, per Modern House. It has a monolithic reinforced concrete core and a heavy-duty steel shell, making it an ideal place to be in the event that the human experiment goes south. Armored windows, metal shutters, and airlock doors contribute to its supreme sense of security, and in fact, the folks at Modern House claim that it can guard against catastrophes ranging "from zombie apocalypse to nuclear threat."

"Customers often come to us with unique requests that need to be fulfilled," says Modern House Chief Architect Alex Wizhevsky. "Therefore, for us, the Cyberhouse has become a certain look forward. The project was conceived as an architectural game, but, surprisingly, we have already received the first proposals."

Modern House has even gone so far as to calculate a price for its Tesla Cybertruck-themed apocalypse-proof bunker: $865,000 in its "basic configuration." Not that there's anything "basic" about keeping you and your loved ones safe from zombie hordes.

The Cyberhouse recalls the LARS BÜRO-designed "Cybunker" concept revealed earlier in December, and it shares much in common with the Tesla Cybertruck from which it takes its inspiration. That vehicle, unveiled in Los Angeles last November, features a similarly angular design, a durable stainless steel body especially resistant to denting, and armored glass that can reportedly withstand 9mm pistol rounds.

Let's just hope that if Modern House ever decides to demonstrate the projectile-resistant properties of its Cyberhouse windows, things go a bit more smoothly than Tesla's now-infamous gaffe.