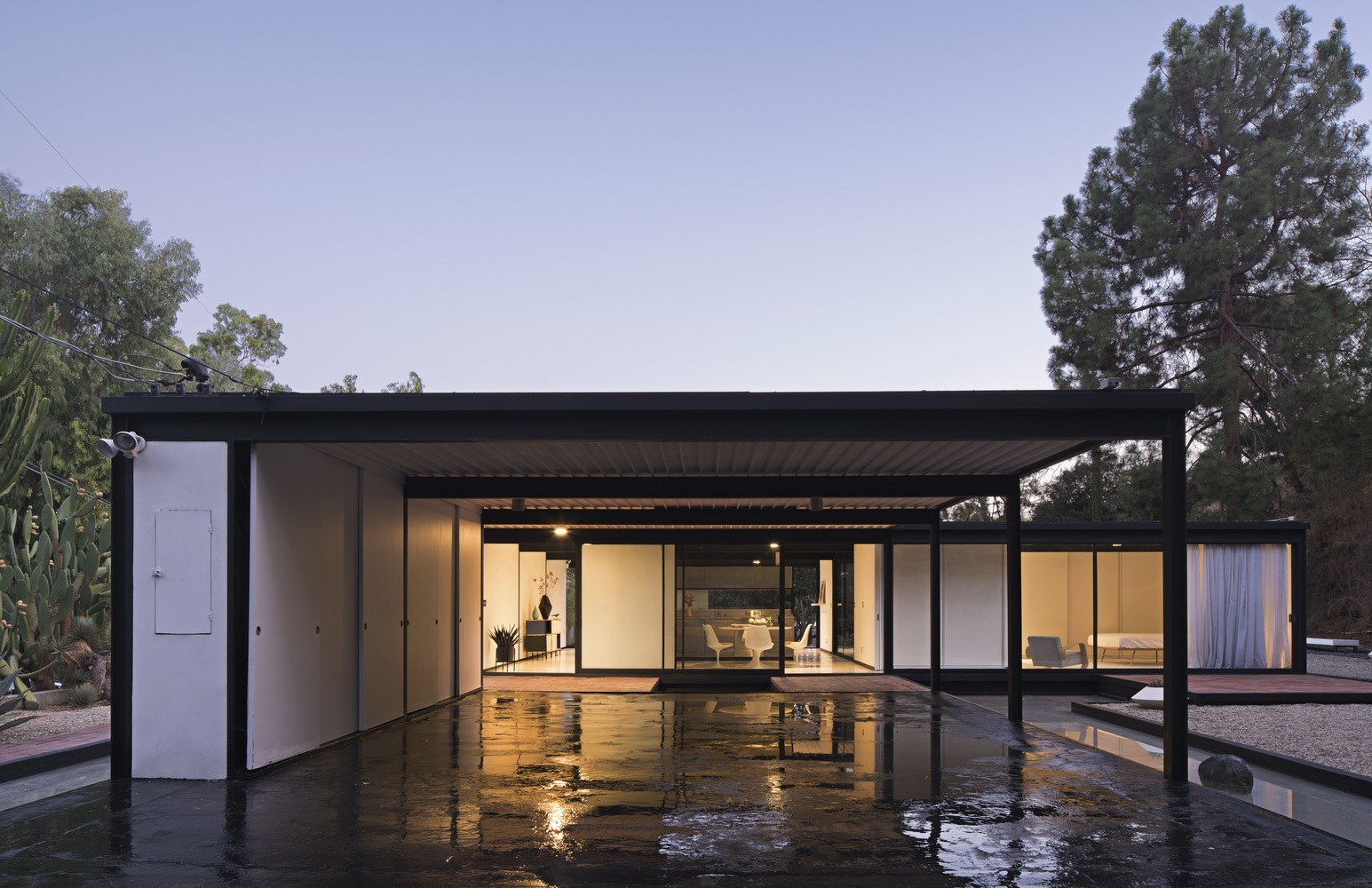 How Did Materials Shape the Case Study Houses?

The Case Study Houses (1945-1966), sponsored by the Arts & Architecture Magazine and immortalized by Julius Shulman’s iconic black-and-white photographs, may be some of the most famous examples of modern American architecture in history. Designed to address the postwar housing crisis with quick construction and inexpensive materials, while simultaneously embracing the tenets of modernist design and advanced contemporary technology, the Case Study Houses were molded by their central focus on materials and structural design. While each of the homes were designed by different architects for a range of clients, these shared aims unified the many case study homes around several core aesthetic and structural strategies: open plans, simple volumes, panoramic windows, steel frames, and more. Although some of the Case Study Houses’ materials and strategies would become outdated in the following decades, these unique products and features would come to define a historic era of architectural design in the United States.

Among the most important unifying aesthetic strategies of the Case Study projects was a modernist focus on exposed structure and functional design. The Eames House (Case Study House 8), designed by prominent industrial design couple Charles and Ray Eames, was intended to express man’s life in the modern world using “straightforward, unselfconscious” design. Thus, the designers made no attempt to conceal or disguise the structural functions of the steel: it acted as interlocking decking and open-webbed joists on the roof, sashing for windows and doorways, exterior wall siding, and H-beams securing the home’s rectangular frame. The most that these components were altered was with an unobtrusive coating of paint: the façade’s steel beams were originally painted a “warm grey” that over time became glossy black, while the Ferrobord steel roof decking system was painted white on its underside with open-web joists left exposed and alternately painted white, black, and yellow. These paint treatments, rather than obscuring the structural performance of these steel pieces, only served to highlight and integrate them within the building’s larger design scheme of colorful paints and panels.

Two of the other most famous Case Study Houses, the Bailey House (Case Study House 21) and the Stahl House (Case Study House 22), were designed by Pierre Koenig and similarly embraced what were then advanced steel construction strategies. Koenig had had previous hands-on experience with steel construction: while still enrolled as an architecture student at the University of Southern California, he designed and built his first steel-framed house for himself and his family. For the Bailey House, he used four prefabricated steel bents to compose the home’s steel framing system and another three half-span bents for the covered carport. Designed according to an L-shaped plan with a solid rectangular core that housed utilities, the volume was a simple rectangular box with visual emphasis placed on the steel structural skeleton. In the core, the sandwiched steel decking walls concealed insulation wiring and pipes, while the perimeter language of the home alternated between sliding glass doors and opaque steel walls. Koenig’s Stahl House, which was built several years later, similarly embraced a simple L-shaped rectangular volume with alternating steel beams and panoramic glass windows.

Aesthetically functioning hand-in-hand with the stripped steel frame, glass windows are therefore another essential component of many of the Case Study Houses. Three sides of the Stahl House were made with plate glass, the largest available size at the time, allowing for panoramic views from the site’s elevated Los Angeles hillside. Similarly, the Eames House variously utilized clear polished plate glass, factrolite textured glass, wire-embedded safety glass, and translucent corrugated glass, which helped cast planes, shadows, and beams of light through the steel frame and colored façade panels. Using the factrolite glass for privacy and the wire-embedded glass for utilitarian uses and safety, the Eames couple made glass an essential part of the house’s aesthetic and functional design.

This material illuminated another one of the Case Study House’s most essential aesthetic strategies: facilitating a connection with nature by merging and reflecting interior and exterior. Each of the homes utilized an open plan and glass façade explicitly open to their natural surroundings, with some—including the Eames House, Bailey House, Stahl House, and Case Study House 28—incorporating an artificial courtyard, pool, or pond as well. In the Eames House, which included a rectangular residential building and separate studio building connected linearly by an intermediate courtyard, the doors, curtains, and windows could be opened to unify the site into a single long open-air span. In the Bailey House, which incorporated a small shallow pond along the perimeter, the pond mirrored the reflectiveness of the panoramic windows and made the structure appear as if it was floating. Moreover, while the interior core of the house—including bathrooms and utility areas—was largely concealed by opaque steel walls, the roof was pierced to allow access to exterior elements in even these private spaces. Finally, melting the barriers between interior and exterior through the extensive use of glass, Case Study House 28 incorporated a total of 4500 square feet of glass windows shaded by large overhangs.

This connection to nature was facilitated by other material strategies as well. In Koenig’s Bailey House, the pond water was actually circulated up through the gutters and roof scuppers, rendering it an early experiment with environmental control systems. In the Eames House, a long tallowwood wall (tallowwood being the hard, durable wood of eucalyptus trees) was installed parallel to the line of eucalyptus trees gracing the front of the façade. These experiments in incorporation and reflection tempered the efficiency and functionalism of high modernist design with a correlative attention to nature.

Another important part of the Case Study House experiment was their use of new postwar materials and technologies. The Eames House, for example, used the Celotex Corporation’s Cemesto, a pioneering, pre-engineered construction panel that was touted at the time for its low maintenance and ease of installation. With a structural strength that entirely eliminated the need for intermediate structural support, the Cemesto panel could function simultaneously as an interior and exterior wall surface with no extra insulation, protective coating, or interior wall surfacing. The Eames House also utilized Wall-tex, a form of waterproof protection and wear resistance for interior walls invented in 1931, and plyon, a type of laminated lightweight material for cabinetry facing that was originally used in aircraft during World War II. These products demonstrated the design mission of the Case Study Houses as efficient residences for modern Americans.

Yet despite these many unifying characteristics, each of the Case Study Houses featured important material idiosyncrasies as well. The design motivation for Case Study House 28, for example, was to use the traditional material of facebrick in a structural, modern way. Thus, almost the entirety of the house was constructed with facebrick and glass, meaning it also required almost no maintenance or finishes. The use of brick was highly unusual among the Case Study Houses, most of which, as stated above, predominately used steel, glass, and occasionally wood or concrete. Likewise, the Eames House is perhaps most famous for its colorful paneling, mixing Grey Cemesto panels, off-white, black, blue, and orange/red plaster panels, and gold leaf or photographic panels in special locations around the site. Finally, the Entenza House, which Charles and Ray Eames and Eero Saarinen codesigned, similarly utilized a simplistic and flexible steel frame structure yet chose to conceal this structure with interior wood paneled cladding.

Over time, the flaws in the original material choices were also slowly revealed: many of the case study houses used only single panel glass, which would prove to make passive temperature control difficult and thus poor from a sustainability perspective. Most tellingly, the Stahl House—which may be the most famous of the Case Study Houses--, while remembered fondly by its inhabitants, would also have to suffer important changes to make it more livable: replacing the windows with shatterproof glass, adding a walkway around the cantilevered living room for window washers, and covering the floors with carpet to make them safer for children.

Altogether, the materials of the Case Study Houses played an essential role in their aesthetics, structures, and function. Despite the incredible innovations and advancements that would change architecture dramatically in the years following, these materials would nevertheless define one of the most iconic eras of American modernist architecture. Embracing stripped-back structural aesthetics, a connection to nature, advanced technology and materials, and experimental design, these houses—and their materials—represented the vanguard of modern construction and design.